Till we get to the point we are wearing jetpacks, operating a drone is the nearest most people will come to flying.

Since the software and hardware technologies such as mobile phones, lithium-ion batteries, and cameras have emerged, the features and layouts which were limited to Hollywood movies are now available at your electronic retailer. You can now spend less than $1,000 to get a drone that shoots 4K video, pilots itself automatically, and stays in the air for thirty minutes.

Even better, the low end of the market has also grown; today, $50 is enough to buy a quadcopter drone with an integrated camera.

And there are plenty of choices between these two price points offering a wide variety of features.

In this guide, we focus on the best drones for sale for novice pilots looking to spend less than $1,000.

7 Things To Think About Before Buying A Drone

New to the world of drones?  Don’t worry, we have got you covered.  Here is a quick summary of what every newcomer should know.

1. Cheaper Drones Are Not Necessarily For Beginners

Like many things in life, with drones, you get what you pay for.  The more you spend, the more features you get that make flying easier.  For example, the Hubsan X4 quad is not a bad place to start – but it lacks sensors found on higher-class drones to help it hover automatically or return if you get in a jam.

GPS is a must-have option for beginners. It is worth paying more for if you want stable flying out of the box, which is really important for aerial videos and photography. You won’t find GPS on toy drones, so photographers will find toy drones a waste of money.

Battery life is the Achilles’ heel of every drone.  A few models claim they to remain airborne for approx 30 minutes on a charge, but in practice to get that much time you need to be flying in ideal testing conditions. The faster you fly, the more weight you put on it, the stronger the wind, the faster a drone will sap its battery.

Additionally, takeoff, transit, and landing time can really add up.

One general rule is to take whatever the manufacturer claims and subtract five to 10 minutes for a midsize drone. Toy drones get between seven and five minutes of flying, though some can hit at the 10- to 12-minute range.

Drone manufacturer Zero Zero Robotics says its forthcoming V-Coptr Falcon will reset the bar for the business by remaining in the air for up to 50 minutes. Originally expected to start shipping in March, Zero Zero halted work in February as a result of the coronavirus outbreak.

3. The Purchase Price Of Drones Is Just The Beginning

You ARE going to want lots of spare propellers, a few extra batteries, perhaps some pop guards and a charger – so you are not waiting hours to fly again.  You’re GOING TO to crash, which could head to repair costs — either for shipping it back to the manufacturer for repairs or replacement parts.

So before you purchase a drone, it is worth spending some time researching availability and the purchase price of accessories, batteries, and replacement parts.  And be cautious of third-party components — especially chargers and batteries — that could be inferior to those made by the drone manufacturer.

When you’re out operating in a public space, or even in your own yard, anyone who notices you flying will think you’re spying on them or someone else.

You might be standing amid a 20-acre field with no one in sight and your drone no above than 50 feet directly overhead, and you might end up getting serious questions from a police officer about being a peeping Tom.

5. Everyone Thinks They Are Dangerous

It doesn’t matter if you’re the reliable pilot or that you could do more harm hitting someone with a basketball than a drone — observers often feel insecure.  After all, nothing about plastic blades turning at high speeds yells “safety.”

As such, US-based drone pilots should get an Academy of Model Aeronautics (AMA) membership. Along with a plethora of benefits including access to AMA-member flying sites, the $75 annual membership covers you with $2,500,000 of comprehensive general liability insurance as well as $25,000 in an accident or medical coverage, $10,000 maximum accidental death coverage and $1,000 fire, vandalism and theft coverage.

6. Finding Areas To Fly Can Be A Challenge

In areas like metropolitan regions and cities, it can be tricky to discover places to lawfully and safely fly. US national parks are off-limits.  Laws differ among the county, state, and municipal parks.

There are also no-fly zones, which puts several metropolitan areas out of bounds in addition to just dangerous due to cars, people, and buildings.

Before you buy a drone – even a toy one, if you’re planning to fly outside – you’ll want to go to AirMap or install the FAA’s B4UFly app to see the no-fly zones in your area. These do not cover state or local ordinances, however, so before you fly you will need to do further research.

The US Federal Aviation Administration requires anyone who flies an unmanned aerial craft that weighs 0.55 lb (250 g ) and 55 lb (25 kg) for recreation register with the bureau.  Criminal penalties include fines up to $250,000, imprisonment for up to three years, or both. Civil penalties for not registering may require fines up to $27,500.

Most $100 UAS drones fall below the 250g limit for registration. For instance, most toy drones are far less than that. A light kitchen scale can be used to weigh your drone to make sure – or check with the manufacturer. This applies to both homemade and store-bought aircraft.

The FAA registration price is $5 and registration is easily done online in a couple of minutes. You don’t need to enroll every aircraft you have, either – just yourself. You will be given a number to attach to what you are flying.

Essentially, it is the FAA’s method of getting you to agree that you have read its safety guidelines, including staying over five miles from airports and below 400 feet.

DJI: The King of Prosumer Drones

DJI is the undisputed leader in drone technologies and dominates the prosumer drone industry with its wide lineup of models for consumers, amateurs, and professionals. Their flying camera platforms start at $100 and rise above $20,000. Some of DJI’s most popular models include the DJI Phantom, DJI Spark, the DJI Mavic, the DJI Inspire, and their professional flying platforms.

But there are other brands making solid quality consumer quads including Husban, Skydio, and Parrot – and there are countless others in this space making affordable drones you can buy at Amazon, Best Buy, and Walmart.

As with most things, the more you spend, the more you get.  And while there are exceptions, you’ll likely be frustrated by drones under $50 with their primitive controls, limited features, and few minutes of flight time.

As you explore the choices, here are a couple of essential things to consider:

OK, now that you know the primary features to consider, let’s go through a few of our top drones for children and beginners, intermediate customers, and “prosumer” enthusiasts – in addition to a starter drone for individuals interested in racing them (a spectacle unto itself).

This small but proven hobbyist drone is a fantastic place to start if you or your child are looking for a drone to learn the ropes.

At about $100, the Hubsan X4 series is affordable and reliable enough for newbie flyers who are OK with the limited five to seven minutes of flight time per charge.

The LED lights allow you to fly at night and ID it from a distance. It includes two batteries, a controller and a USB charger, and four propellers.

The Mavic Mini is DJI’s lightest and smallest flying camera, weighing in at 249 g (8.8 oz), which means you do not have to register it with the FAA.

Despite its compact design, it provides most of the best features you’ll get with the company’s higher-end models.

The Mini folds up neatly for easy portability, comes with a remote (which also folds up) and can fly for around thirty minutes on a charge.

The camera specs are rock-solid, too. You get 12-megapixel photos and 2.7K video at 30 frames per second (and 1080p at 60fps). The 3-axis motorized gimbal guarantees that you’ll get about the same clear photographs and smooth video that most professionals expect.

One reason the Mini is so light is that it has fewer sensors for recognition and obstacle avoidance. That means there will be crashing and a learning curve.

But after getting the hang of it, the Mini is stable, agile, quiet, and safer to fly than other DJI models such as the Air and the now-discontinued Spark. 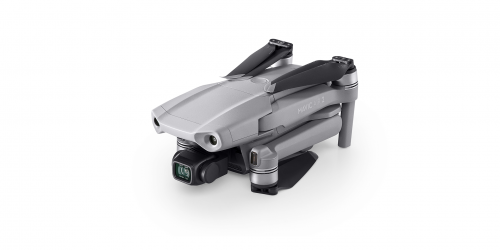 The Mavic Mini is the perfect camera drone to the most people — but it lacks the build quality and a couple of high-end features that come with the step-up model, the DJI Mavic Air 2.

The Mavic Air is not cheap — it costs a few hundred dollars more than the Mavic Mini — but it is stronger and considerably sturdier.  It is also heavier, so it can only fly for around 20 minutes on a charge, and you will need to register it to operate legally (not that big a deal.)

In addition to improving key camera specs — it is capable of capturing RAW photos and shooting full 4K video — the Air also provides you more flight time, superior obstacle avoidance characteristics, a higher top speed (42.5 mph), and 8GB of storage that is integrated.

Though mainstream drones such as the DJI Mini fly pretty fast, racing drones like the Tinyhawk fly much faster – up to 100 mph.

They’re also more agile, built for acrobatic movements that you control yourself using manual controls. This also means there is a learning curve that ordinarily includes some crashes.

The Tinyhawk drone is a great starter racing drone because it keeps things really simple.

Although the process will be less bothersome than other systems, you have to learn how to pilot it. To begin with, you do not need to worry about getting all the individual parts to work together — or patching anything, which is need for many DIY models. The Tinyhawk is ready to operate.

The Tinyhawk also includes a controller (transmitter) and FPV goggles for operating by the first-person view.  A great deal, all things considered.

I hope this guide helped you to orient yourself on the basic ins and outs of buying and operating your first unmanned aerial vehicle, or drone.

This site uses Akismet to reduce spam. Learn how your comment data is processed.